Home My Experience Take The Risk?

When the price of zcoin jumped to $40 I went to coinmarketcap to look at the charts and other info. While on the web page I clicked on the markets tab and this came up. 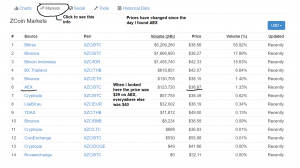 I had known this tab existed and had used it several times to see what exchange had a coin I wanted. This time I happened to look at the price section more closely and noticed a big difference. The price was $40 on almost every exchange except AEX. There it was $29.

This is a big difference. I would still be short of my 500 coin goal but the amount of money I would be short was drastically reduced. Only problem was I had never seen AEX exchange mentioned before. This wasn’t too troubling because things happen fast in this world with a lot of information.

After doing research I learned that the exchange was fairly new. This was almost all the information I could find though. Barely any other mentions of it anywhere else. The lack of information and the price being so much lower made me hesitate. I decided to ask AEX on twitter about moving coins to a wallet. 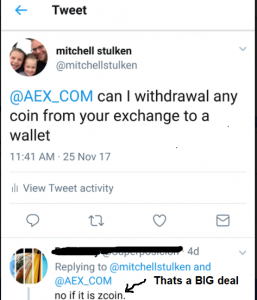 Well, that is not the answer I was hoping to hear. This person had bought zcoin on AEX and now could not move them off. He told me about other people having problems moving coins off the exchange as well. After some more digging I found the people he was talking about.

I also went into the exchange and checked the withdrawal button. When clicked it said temporarily closed. This person had been in contact with AEX and they assured them that the ability to move the zcoin would return in the near future. But the near future is not a specific time and can make you feel slightly uncomfortable.

With all this information I decided not to take the risk. It was a great price but I couldn’t afford to lose the money I had. If it was stuck in this exchange it did me no good at all. 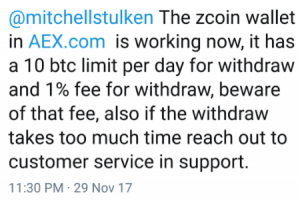 As you can see the zcoin wallet withdrawals were now working. There was a fee but that was to be expected. By this time the price had risen and matched the other prices at the other exchanges.

So in hindsight, it would of been smart for me to buy on this exchange at such a low price. But I am not beating myself up about it. To me it wasn’t worth the risk. Maybe to some of you it would of been, and this is something you will have to decide for yourself.

If your comfortable with the risk then go for it. But if your not I think it is better to play it safe. 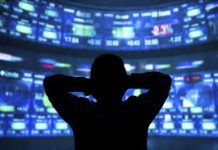